This was a lady who had thick axillar hair and she plucked the hair. She did this regularly for a few years. She said this caused hyper-pigmentation of her axillar skin (but not papules) and so she went to a beauty salon to have laser removal of her axillar hair. After a few treatments of laser removal, she found there were numerous skin papules on her left axilla (more than 60). There was just a few papules (less than 10) on her right axilla. The papules were not itchy. They were monomorphic, follicular, skin-colored to yellow papules (1-2 mm in diameter). There were no comedones. There were no pustules because nothing could be squeezed out from the papules.

FACT AND NATURE OF THE DISEASE:

Fox-Fordyce disease (FFD) is a relatively rare entity with a typical clinical presentation. Numerous studies have described unifying histopathological features of FFD, which together suggest a defect in the follicular infundibulum resulting in follicular dilation with keratin plugging, subsequent apocrine duct obstruction, and apocrine gland dilation, with eventual extravasation of the apocrine secretions as the primary histopathogenic events in the evolution of the disease.

Because defective infundibular maturation has been suggested to play a central role in the evolution of FFD, the close temporal relationship of laser hair therapy with the development of FFD suggests a causal role.

It’s not too difficult to find the various evidence supported treatments in the internet.

Medical therapy for Fox-Fordyce disease has been complicated by the irritant potential of the topical medications. Topical steroids have not been useful. Topical retinoids have been irritating, which has limited their long-term use. In 1979, Giacobeti reported success with topical 0.1% tretinoin cream. In 1990, Casani reported treatment with topical 0.5% tretinoin cream. In 1995, Miller et al reported treatment of Fox-Fordyce disease with topical clindamycin solution.

MY APPROACH TO THE SKIN DISEASE:

The problem is caused by laser epilation which disrupts the infundibular maturation and leading to apocrine duct obstruction, apocrine gland dilation, with eventual extravasation of the apocrine secretions. Instead of aggressive approach to the problem (ie. oral isotretinoin or surgical treatment), I would like to continue the topical treatment (ie topical adapelene, topical clindamycin, plus topical pimecrolimus) and to wait for the condition to improve/subside. Afterall, the cause is the stimulation (side-effect) of laser, it is possible that the after effect of laser will wane off after a few months’ time, and the condition will improve spontaneously. 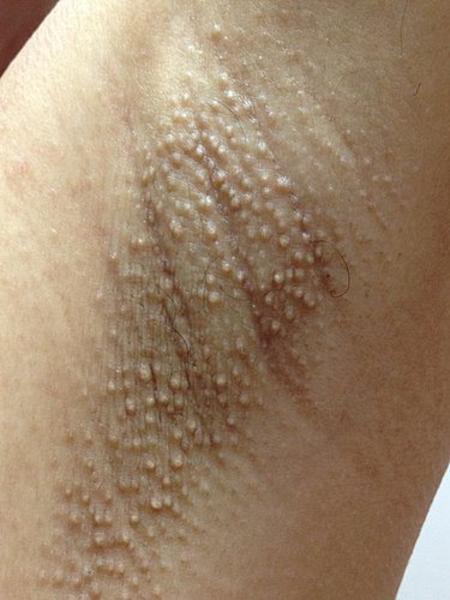 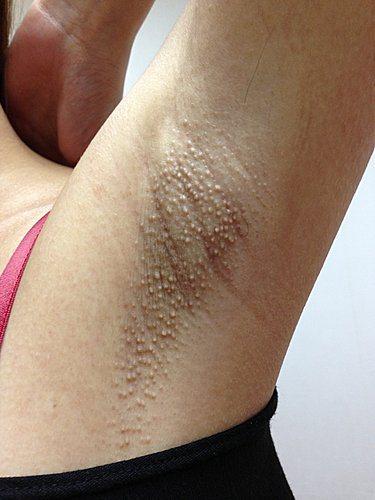