This is a 35 year old gentleman. He complained of skin lumps on the knuckles of his fingers. They were not itchy. It started more than one year ago when there was a small papules on one of his knuckles (he forgot which one). There was just very very little itch and he picked and scratched it and the small papule grew bigger and become a nodule. Soon, the itch (as a matter of fact, very very little itch) started on some other knuckles. He did the same (pick and scratch) and these small papules on the knucles became bigger as well. He mentioned that the itch was very very mild. He was advised by his family doctor to stop scratching on them but these plaques did not disappear.

The plaques were quite well defined. They were erythematous with mild scaling and sign of excoriation with some crusting. There were totally 4 such circular plaques on the knuckles (right index finger, left thumb, left index finger, and left little finger). The other un-involved knuckles looked normal.

He did not look anxious nor neurotic.

No history of eczema or psoriasis or atopic diathesis. No significant family history.

He was prescribed super-potent topical steroid and emollient for his skin lesion for over one month. There was minimal improvement.

1. Is this a response to chronic stimulation (picking and scratching)? Like lichenification (corn)? or is it something else? If yes, what started this vicious cycle? And what maintains this vicious cycle?
2. The lesions are not itchy, how can I stop the patient from scratching them? Obviously he knew he should not scratch, and he denied scratching or picking but the fact is that he is still scratching them as signs of excoriation can still be seen.
3. topical steroids didn't work, should we try intra-lesional triamcinolone injection?

Knuckle pads are benign, asymptomatic, well-circumscribed, smooth, firm, skin-colored papules, nodules, or plaques, located in the skin over the dorsal aspects of the metacarpophalangeal (MCP) and interphalangeal (IP) joints. A history of repetitive trauma related to sports or occupation is often present.

Garrod first described knuckle pads in the medical literature in 1893,[1] but knuckle pads have been observed since the Renaissance era. Allison et al shows a photo of Michelangelo's statue of David displaying knuckle pads (Florence, Italy) as well as his statue of Moses (Rome, Italy), Victory (Florence, Italy), and Giuliano de Medici (Rome, Italy).[2] The name knuckle pad seems to be a misnomer because in most reported cases, lesions occur over the proximal interphalangeal (PIP) joint, not over the knuckles.

Knuckle pads may be idiopathic, genetic, acquired as a response to repetitive trauma, or associated with several other acquired conditions.

Most patients are asymptomatic. Firm skin-colored papules appear sequentially in multiple sites overlying the MCP and PIP joints of the hands. Individual lesions enlarge into well-defined plaques and nodules. Though complaints of pain or functional impairment of fine motor skills are rare, cosmetic concerns frequently are raised. A history of repetitive trauma often is elicited.

Knuckle pads are well-circumscribed firm dermal papules, nodules, or plaques approximately 0.5-3 cm in size, located on the extensor aspect of the PIP or MCP joints. If subjected to repetitive injury, knuckle pads may develop over virtually any bony prominence, but the PIP joint area is affected most commonly.

Most knuckle pads are idiopathic or are related to repetitive trauma. Work-related trauma with repeated motions or rubbing of the PIP joints or knuckles, as seen in live-chicken hangers in a poultry processing plant,[4] has been reported. Athletes, such as boxers, have been known to traumatize their knuckles and fingers in a repetitive fashion, causing knuckle pads.[5, 6] Surfers have developed "surfer's knots" from repeated friction between the surfboard and the body part exposed to the repeated trauma.[7] A few cases involving the toes have been reported; these cases were thought to be sequelae of ill-fitting shoes.

Psychologically disturbed children who bite and suck their fingers cause thickenings that resemble knuckle pads to occur in the skin in the traumatized areas. Patients with bulimia who use their knuckles or fingers to induce emesis sometimes develop fibrotic papules resembling knuckle pads.[8]

Some cases of knuckle pads are familial. They have been associated with the autosomal dominant palmoplantar keratoderma with and without ichthyosis vulgaris. Knuckle pads were found in 2 families with autosomal dominant sensorineural deafness and leukonychia (Bart-Pumphrey syndrome).[9] Knuckle pads also have been reported in pseudoxanthoma elasticum.[10, 11, 12] Dupuytren disease, Peyronie disease, and Ledderhose disease are at times observed together, and the triad may be associated with knuckle pads.[13, 14, 15] Knuckle pads also have been associated with esophageal cancer,[16] hyperkeratosis,[17] oral leukoplakia,[16] and clubbed fingers.[18] One case report links phenytoin with polyfibromatous syndrome.[19]

Neither medical nor surgical interventions for knuckle pads are very effective. Eliminating the source of mechanical or repetitive trauma may improve the lesions. Wearing protective gloves or changing occupation may be necessary. Intralesional injections of corticosteroids or fluorouracil may reduce the size of the lesions.[23] Lesions caused by biting or sucking may require a psychiatrist to treat the underlying psychological problem. A cast or splint placed temporarily on the involved areas of the hand may aid in reducing the lesion. Application of silicone gel sheeting has had limited success.[24] Applications of keratolytics, such as salicylic acid or urea, have helped to soften and even reduce the lesions. Radiation therapy and application of solid carbon dioxide have been reported to be of some help in selected cases.

Surgical intervention may be indicated if knuckle pads cause a functional problem. Recurrence after surgery is likely, especially if the trauma that caused the initial knuckle pad is not eliminated. Scar or keloid formation may result from surgical intervention. Tendon tethering, another surgical complication, occurs only if the joint space or capsule is accidentally cut with damage to the tendon in the attempt to remove the knuckle pad.[25] 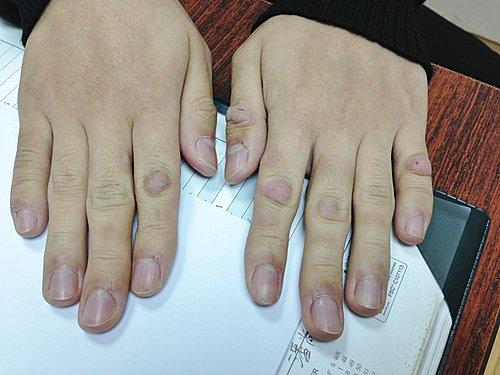 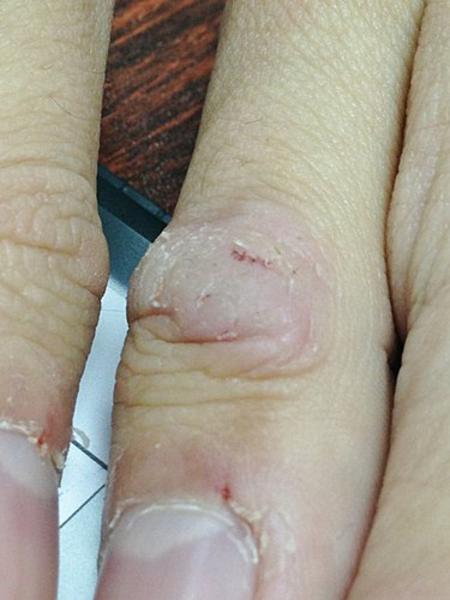 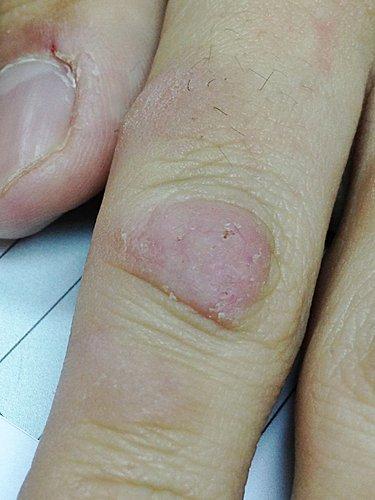 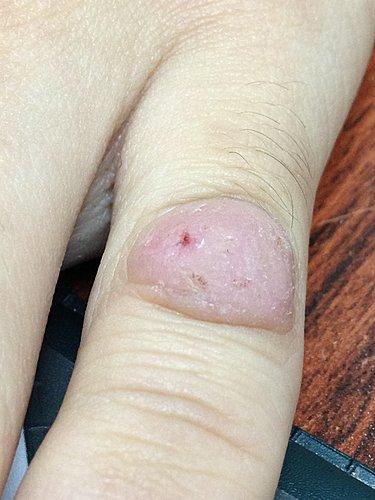